The relaxation techniques for Yoga Nidra help bring about calmness, quietness, and clarity in those who practice this deep form of meditation. The meaning of Yoga Nidra is "deep sleep," and those who reach this state of Yoga Nidra are able to completely let go of all words, thoughts, images, impressions or pictures, arriving at a state of total relaxation.

Yoga Nidra has a number of benefits, including stress relief, improved psychological health, a feeling of balance and harmony, and relief of insomnia and anxiety. The techniques involved in this practice also helps in the fight against certain diseases, especially those brought on by tension. Sometimes, practitioners even report a decreased need for analgesic, hypnotic and sedative medications.

The practice of Yoga Nidra can be distilled into three basic steps.

Step One: Establish Your Purpose

Start by establishing a calm intent of purpose, similar to meditation preparation. Most perform Nidra yoga lying down. Many practitioners suggest practicing prior to traditional sleep, not only for the restorative benefits, but also for the potential of lucid dreaming and heightened awareness even while the mind and body are in a state of rest.

Focus your intent on each individual body part. This is actually a common relaxation technique recommended by doctors for patients with sleep issues, as it quiets "brain chatter" and keeps the stress over being awake to a minimum. Detail is important during this stage: concentrate specifically on the tips of your toes, then the whole toe, followed by the top of the foot, then the soles, and so on. Your mind should wander over each portion of your body as if you are literally touching it.

Once you've reached the top of your head, take in the whole body. Then repeat the process. Everyone relaxes in a different manner, so it's not enough to say, "relax as you do this." Whatever method aids your gradual descent into peaceful mindfulness is what you should do during this time, whether it's deep breathing, imagining a lush forest, or hearing the crash of waves on the shore.

While the original Yoga Nidra is still performed frequently, contemporary yogis like Swami Rama and Swami Satyananda Saraswati have developed their own techniques for Yoga Nidra, which are also practiced today. 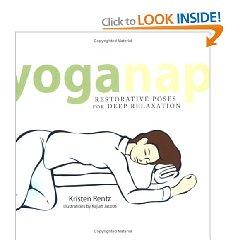 Swami Rama's 61 Point Relaxation Technique is a gradual, systematic movement and release from one point of the body to the next every couple of seconds (or after one or two breaths). It is important for those practicing the 61 Point Relaxation Technique to learn where each point is and move along smoothly and effortlessly. If you move too slowly, your attention may drift, so it is better to move from point to point rather quickly, relaxing each point as you go along.

The points begin at the forehead, working down the throat to the shoulders to the tips of the fingers. The relaxation continues to the chest, abdomen, down to the hips, knees, ankles to the toes and back up to the forehead again.

Swami Satyananda Saraswati developed a technique for Yoga Nidra that induces a deep state of relaxation that may be effective against insomnia and various anxiety disorders. This systematic method of inducing complete mental, emotional and physical relaxation is believed to be suitable for all practitioners. 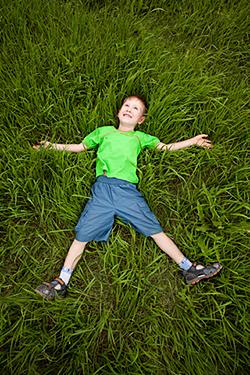 This type of yoga can also be very effective with children. When you first introduce the idea of focusing on each body part to calm down, preschoolers might wiggle, eight-year-olds may giggle, and teens will probably roll their eyes. But, most children do find quiet moments refreshing, even if they don't think it helps at the time.

Here are some introductory steps for yoga Nidra for children:

If a guiding voice will help you find relaxation through Yoga Nidra, consider listening to one of these CDs as you practice:

Yoga Nidra may be described as a holistic approach to relaxation, one that releases a person from all muscular, mental and emotional tensions. Men, women and children who practice this form of relaxation believe that sleep alone will not provide a complete state of relaxation. Instead, they strongly feel that total release is only possible through Yoga Nidra.