Diving into the mystery and meaning of yoga symbols can bring new depth and insight to your yoga practice. There are three types of symbols that are beautiful entry points for learning about this fascinating topic. First, the yoga postures themselves are symbols, often relating to animals or objects of nature. Second, the imprints and images you often see in yoga books are symbols made up of the ancient language Sanskrit, with the most famous symbol representing "Om." And finally, the Chakras have symbols illustrated in beautiful colors that carry their own hidden meanings. Next time you dip into Downward Facing Dog or see an ornate illustration of the Chakra symbols, you'll have a new awareness of the history and imagery that weave together the story of yoga.

Many yoga postures are inspired by animals or nature. The images below show some common yoga poses and their nature counterparts. Practicing a posture with the awareness of the symbol it represents can add a new layer of meaning and inspiration to the asana. Once you know what a pose represents, you can use that to reconnect yourself with nature. Most asanas have a story behind them, and it is fun to play with these aspects in your yoga practice.

Here are just a few examples of yoga postures and their nature counterparts.

The Symbol for "Om"

Om is possibly the most recognizable symbol in yoga. It contains everything in the universe aligned in one, simple sound. One way to practice chanting Om is to start at the back of the throat, then move forward on the palate, and finally close with the "mm" sound at the lips. Likewise, you can imagine your breath moving first from the belly, then to the heart, throat, and finally to the lips. This simple practice can be used to ground yourself before yoga practice or meditation. 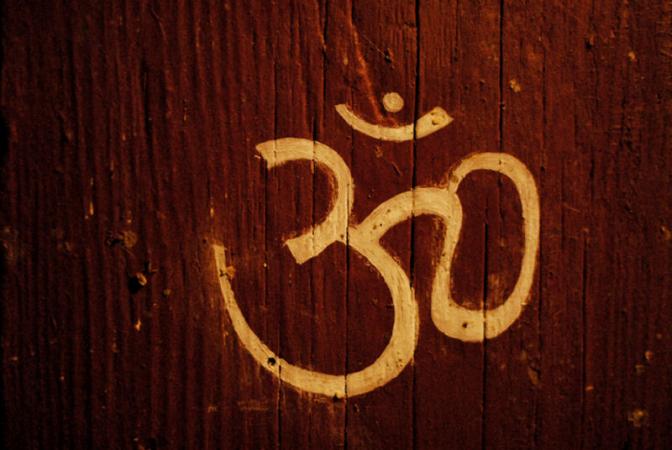 The symbol for Om is written in the ancient language of Sanskrit. Each element of the image has meaning:

Symbols for the Seven Chakras

Chakras are energy centers in the body. There are seven chakras, each with its own symbol and color associated with it.

Muladhara is the first Chakra, and is located at the base of the spine. The color for this chakra is red, and it represents the root of your body and a sense of home and safety.

Svadisthana is the second Chakra and resides near the hips, lower abdomen, and genitals. It represents softness, intimacy, family, and procreation, and is tied to creativity with the sixth Chakra.

Manipura is your power center and resides near the naval. This is the part of the body where you find your core strength, your fire and digestion, and is the color yellow. It is here where you also battle ego, and learn to balance personal power with compassion.

Compassion and love are the foundation of this green chakra, found at your heart center. Bridging your power below and your creativity above, Anahata is the central Chakra of your body.

Visuddha is located near the throat, and is the place from which creativity flows. It is your voice, and your ability to communicate and express things to the outside world.

Ajna is the sixth Chakra, otherwise known as your third eye. It can be found in the middle of your forehead, between the eyes. Ajna is the place of all-seeing and all-knowing. It is the place from which your intuition and knowledge stem. Here you can find clarity when meditating, and connect with the larger universe as you see plainly and clearly, even with your eyes closed.

The seventh and final Chakra, Sahasrara, is represented in symbol form as a many-petaled lotus. It is at the crown of the head, and it connects you with universal conciousness.

The seven Chakras move from the base of the spine up to the crown of the head, and mirror the personal development and building blocks through life from childhood to adulthood. The colors of the Chakra symbols run from warm tones to cool tones as their meanings move from home, stability, and roots to a floating spirit and connection with a larger universe. The seventh chakra at the top of the head is often represented as a thousand-petal lotus. 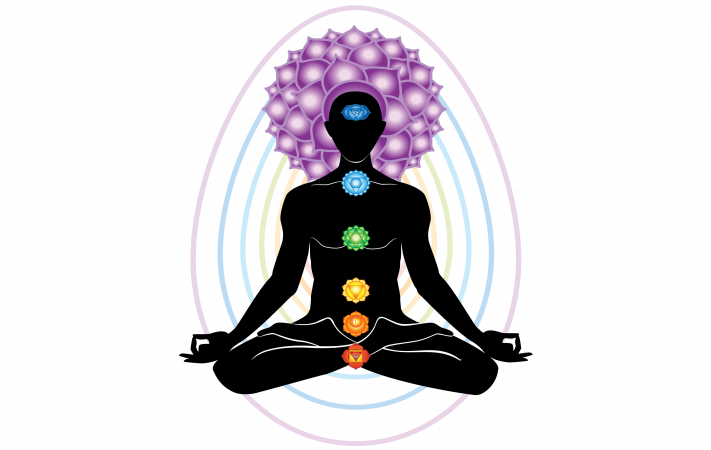 Yoga is a multi-faceted practice with a complex history. It is important to seek out more education on a topic such as yoga symbols, because the explanations are as varied as the practice itself. Try these resources for more help in your quest for understanding.